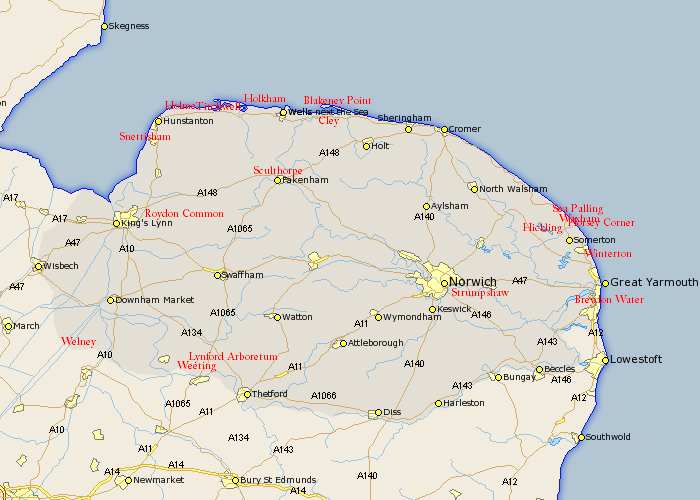 Norfolk is considered to be one of the best counties in England for the serious birder and for those who just enjoy watching birds at a more leisurely pace. All birders are spoilt for choice of where to begin. Most head straight for the North Norfolk coastline, where, because of its geographical position is renowned for its 'fall' of Autumn migrants if the right weather conditions prevail. The  North Norfolk Coastline has one of the most beautiful and unspoilt coastlines in England and has several bird reserves that are linked by other superb places for birdwatching. The coastline continues westwards and on into The Wash and eastwards until heading in a southerly direction to the Suffolk border. Both continuations of the coastline also offer wonderful vantage points for the keen birder. Meanwhile Norfolk also offers some excellent inland sites for birding too, for those prepared to go off the beaten track to look for their own birds. Snettisham Pits is an RSPB Reserve that borders The Wash, that is famed for its magnificent views of waders in flight at dawn and dusk. If you can combine your timing of your visit with just before high tide, especially in the months of February and March when the Spring high tides make viewing absolutely spectacular, as the wades take off from the beach to roost on the pits in what seem like swirls of smoke drifting across the sky.

Snettisham Country Park, placed between the pits and Heacham is ideal for an early morning walk (before the dog walkers arrive) as the summer migrants arrive. Cuckoos can be seen on overhead wires and Grasshopper Warblers can be seen reeling from the Hawthorn and Bramble bushes. Lesser Whitethroats, Whitethroats, Ring Ouzels, Wheatears and Yellow Wagtails can all cheer up a Spring morning.

Sunset over The Wash at Snettisham

At Holme there are two bird reserves: Norfolk Wildlife Trust manage coastal dunes, scrub, marshes and a few pine trees as well as running a visitor centre where visitors are welcome. There are newly built hides which overlook some scrapes and much of Redwell Marsh and views towards Titchwell. Norfolk Ornithological Association is a Bird Observatory that also has hides overlooking Broadwater and Redwell Marsh as well as running a ringing station. Visitors are welcome at both the visitor centre and to watch ringing taking place if it is not too busy. There are also 3 hides in the village which give a different perspective of Redwell Marsh as well as some pools. I took this photograph of Titchwell Marsh when a friend offered to take me for a spin in a light aircraft around the coastline. It was good to see all the places that I have spent so many happy hours birding in. The Freshmarsh, Brackish Marsh and the surrounding marshes, fields, beach and sea can all be clearly seen.

Titchwell Marsh is managed by the RSPB but it has a public footpath that runs down to the sea on its West side. However there are some excellent hides from which to view the birds on the lagoons that members and paying non-members can use as well as paths and boardwalks to give even more opportunities for watching birds. 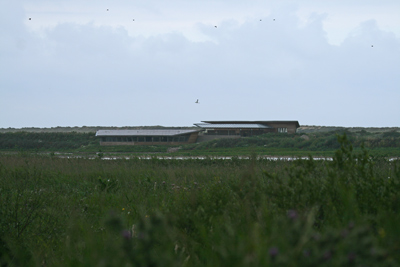 The Holkham Estate is popular with birders. In the grounds of Holkham Hall deciduous woodland is home to Lesser Spotted Woodpecker and the occasional Hawfinch as well as a few scarce migrants. The lake can often hold scarce water birds. From Lady Ann's Drive, Holkham Bay can be good for Shorelark, Twite, Snow Buntings and White Wagtails and well as Rock Pipits. From Lady Ann's Drive two hides provide excellent views over the grazing marsh that is home to thousands of geese in the winter months. The Corsican Pines that have been planted in the dunes, run east through to Wells and at this end there are also some lower deciduous trees that seem to regularly trap scarce and rare migrants. The pines also run west to Burnham Overy Dunes. Keep an eye out for Common Crossbills and Warblers.

Cley Marsh is managed by the Norfolk Wildlife Trust. It has a number of hides that overlook several scrapes that attract huge numbers of wildfowl in the winter months and a great number of waders at various times of the year. The shingle sea bank is a good sea watching place when sea birds are migrating. East bank and Arnold's Marsh are also famed for their excellent sightings. A stroll right around the reserve would keep you occupied for many hours.

The shingle sea-bank looking towards Salthouse and North Scrape. For the committed birder an Autumn would not be complete unless a trudge from Cley to Blakeney Point in search of that elusive rarity had taken place. How many of you have reached Half-way House and wondered if the bird will 'still be showing' before you run out of energy or the light fails before you reach The Point?

However on a Spring day with a light breeze and the sun in the sky, who knows what you might find lurking in the Plantation at the Point? Where better to go to get away from the crowds than a leisurely stroll along to the Point when all the boats and tourists have returned back to Morston?

In this picture that I took from the aircraft you can just make out Half-way House. Sheringham is probably the best place in Norfolk for seawatching. With strong north-westerly winds in late summer or early autumn seawatchers could expect to see shearwaters, skuas and with luck an odd Sabine's gull or a couple of petrels. The concrete shelter on the sea-front at least keeps you dry but don't expect to be very warm on a northerly blow!

The dunes at Waxham and Winterton attract good numbers of migrants especially passerines. In late autumn early winter Winterton is also good for raptor watching. Many rare species have been found at these localities. Great Yarmouth Cemetery is famed for its ability to hold migrating species of birds. Both the north and south sections should be checked in the Autumn. The beach near the piers is also a good spot for Mediterranean Gulls.

Breydon Water is a vast expanse of mud at low water and can hold thousands of waders. In winter months at high tide it is also possible to see thousands of wildfowl.

If you like to be warm and cosy whilst you are watching the birds in the depths of winter then Welney is the place for you! A brand new visitor centre is about to be opened and the main hide is heated! Of course there are many other hides where you can feel at home in the cold too! Welney is a Wildfowl and Wetlands Trust Reserve and is a spectacular site for watching Swans and wildfowl being fed. Many swans come to roost on the water just in front of the hide just before dusk which can linger in the memory for a long time. However Welney is also good for observing breeding waders in the summer too.

Probably one of the best known sites in Norfolk for Hawfinch and Crossbill. Lesser Spotted Woodpecker and Firecrest are also seen here on occasions. The Norfolk Wildlife Trust run this reserve on The Brecks as a place to see Stone Curlews from about March to September. It is also a good place to see Woodlark. Strumpshaw Fen was once the Norfolk stronghold of Cetti`s warblers, however they can now be heard in many reedbeds along the coast. A little further along the road at Buckenham and Cantley level crossings are the places to see the Taiga Bean geese in winter.

This is also an excellent place for Swallowtail Butterfly and many dragonflies. Norfolk Hawker can be seen along the Meadow Trail in June. Hickling Broad is managed by Norfolk Wildlife Trust. Access can be gained either from the new visitor centre or from the Weavers way footpath by parking in Potter Heigham village near the church. Rush Hills scrape is good for waders and Swallow-tailed Butterflies can also be seen from this path in the summer. The raptor and Common Crane roost can be seen in the winter months by parking at the visitor centre and then walking down the lane to the old disused windmill. Up to 50 Harriers have been counted on some winter evenings as well as a couple of merlins.

Back to top of page