This short family holiday was organized by ourselves as a visit to Pauls brother who lives in . It was not intended as a birding holiday but we had a few strolls around the city parks and nature reserves as a way of spending time together over the festive season whilst enjoying some of the wintering birds present. We booked our flights rather late at a cost of £417 each from www.lastminute.com  We stayed with Pauls brother and wife who live in Brooklyn and either travelled by underground (to Central Park) or in Marks pickup truck.

Bitterly cold with temperatures hovering around freezing with occasional snow showers. Some sun.

Central Park in is surprisingly good for birding with plenty of mature trees and a huge lake. It is however very busy with people who sometimes stop to ask what you are looking at. If you are lucky you may find someone with a plentiful supply of bird food who is keen to feed all the wildlife giving good photographic opportunities. Paul and I flew from Heathrow to . Whilst walking along corridors to collect our luggage in we spotted a Red-tailed Hawk over one of the runways. House Sparrows and European Starlings were around the terminal buildings. It was an eventful start as I was detained and taken away at passport control for apparently having my thumbs the wrong way around!!! It only took two hours to convince them that I had had no surgery since my last visit to the I was not allowed any communication with Paul who had no idea what was happening. After re-classifying my thumbs I was allowed to proceed and we were picked up by Mark. We spotted a Northern Mockingbird and a Laughing Gull en route to Marks apartment.

Unfortunately I suffer badly with migraines and I spent the day in bed feeling very sorry for myself! Mark was busy building four apartments in and Paul and I were taken to see the progress being made. Looking out from the back of them onto yet more apartments with fire-escapes I was pleased to see a Blue Jay and Tufted Titmouse in a small bush that had survived the builders. A Mourning Dove squat huddled on a fire-escape trying to shield itself from the intermittent snow squalls.

Later in the day a trip to saw us walking around the river in the falling snow that was being whipped across us in a horizontal fashion. It was bitterly cold as we watched a Bufflehead land on the water. American Herring Gulls and Mallards were standing forlornly around as Gadwall and Mallards were sheltering under some loading bays. I was up early for an early start to the day but everyone else had other ideas so our arrival into was about mid-day. A huge shame as it was a cold but beautiful sunny day. Common Grackles welcomed us into the park as Blue Jays and Black-capped Chickadees called from the trees above us. A Tufted Titmouse joined me as I tried to grapple with my camera bag with frozen hands. 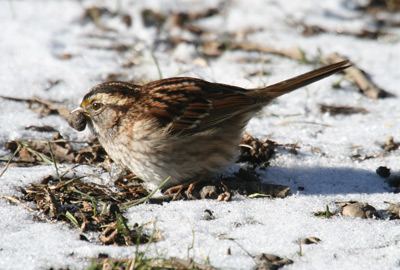 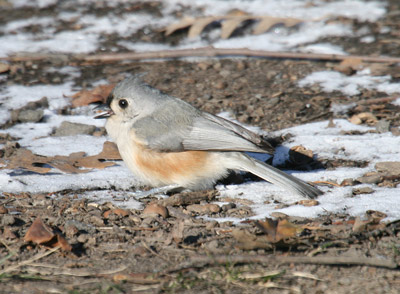 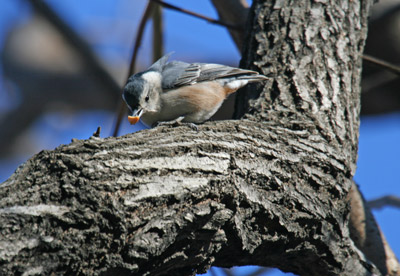 Walking into the park it was very busy with lots of New Years Days revelers all taking advantage of the sun. This is a wonderful park that New Yorkers are lucky to have right in the middle of their city. It is surrounded with grand and huge Skyscrapers but with so many mature trees and a lake it provides good habitat for wildlife. A Downy Woodpecker flitted from tree to tree as I attempted to photograph it. It was joined by a Red-bellied Woodpecker and a White-breasted Nuthatch. 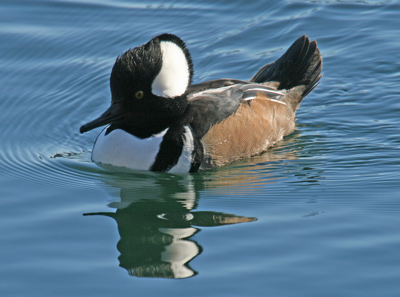 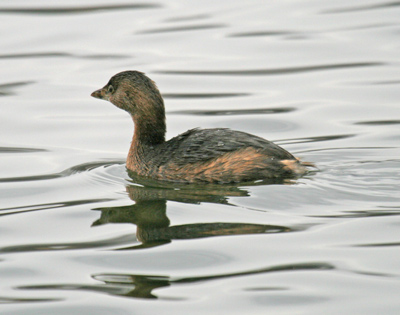 We walked around the edge of the lake where Mallards mixed in with Black Ducks. Hooded Mergansers were spectacular in their breeding plumage. They swam with Ruddy Ducks that have now become difficult to see in now that a cull has taken place. American Coots and Ring-billed Gulls kept the bird list growing. Shovelers and Pied-billed Grebes provided more photographs. 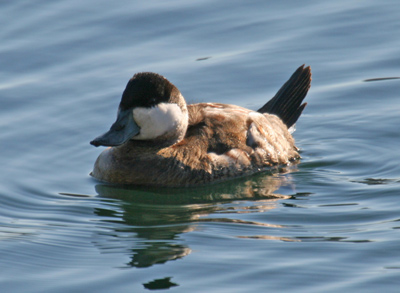 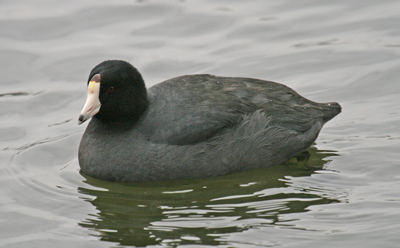 Further on into the park we came across a lady who was surrounded by squirrels and birds. She had a plentiful supply of bird seed and nuts and was providing enjoyment for many people who stopped to watch the spectacle of dozens of birds and squirrels that were glad of the food. American Robins were also tipping over leaves in the undergrowth looking for food. After taking a food break in the parks café we came across a Coopers Hawk and a Red-tailed Hawk roosting in trees that the park is now famed for.

The day dawned cold and grey as we decided where to go. It was already quite late and we needed a walk to burn off a few calories consumed the night before. I suggested might be a good place as a kindly American birder had suggested it before we left as a good local place to visit. Once again it had good mature trees and a lake. However the weather was unkind and once again it was bitterly cold with intermittent snow showers. This made photography a challenge as there was not enough light for our bigger lenses. 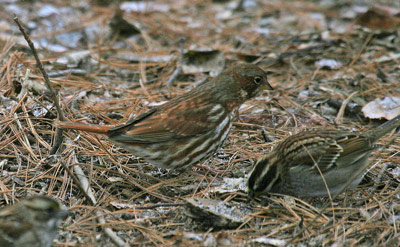 Once we arrived in the park a Hermit Thrush flew to a park bench and posed for the camera. A fox sparrow rummaged for food under a feeder as we stood to watch the birds fly to and from the feeder.

We wandered on where we watched a variety of birds feeding and flitting amongst the trees. American Robins were everywhere but did not allow close approach for photography purposes. A few Northern Cardinals joined them in the feeding process. 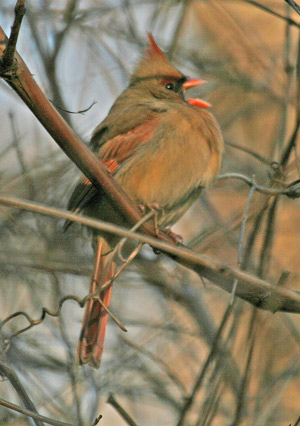 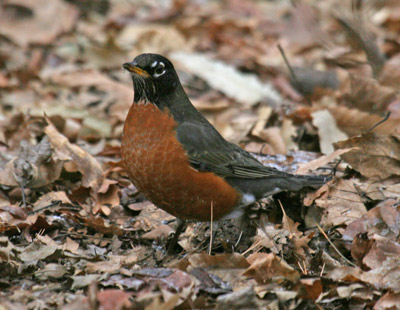 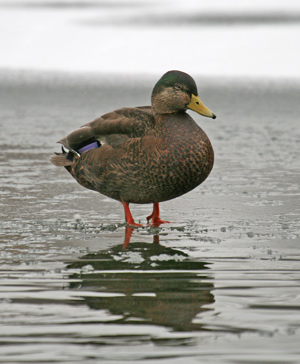 We wandered on in the snow flurries and joined New Yorkers feeding all the gulls and ducks by the frozen lake edge. We stopped to admire real Canada Geese as well as Black Ducks/Mallards. 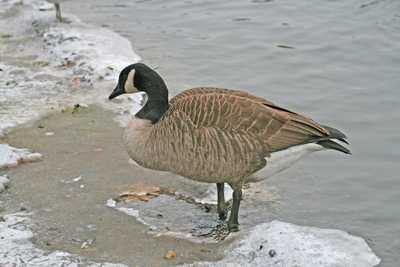 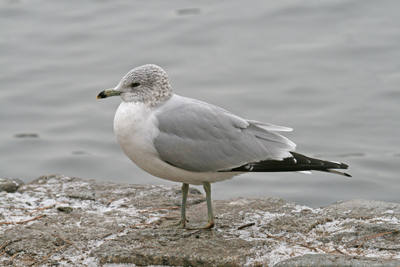 After a bite to eat and a warm-up in a local café we retraced our steps. We were hoping that the sun would emerge, but it was not to be. The cold certainly bore into us aided by the wind. 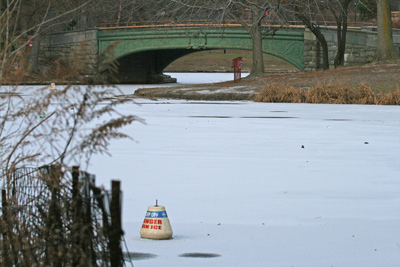 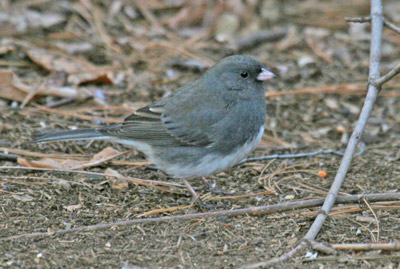 The snow flurries certainly gave us interesting views of a Northern Mockingbird. Northern Mockingbird in the snow

Mark kindly drove us to where last time we had visited we had stumbled upon a Nature Reserve. However in mid-winter it was certainly a different place as it was certainly not bustling with birds as it had been last time. By the waters edge it was bitterly cold and much of the lake had frozen with a few Geese and ducks standing on the ice. Mark and Paul soon disappeared on me so I was left to my own devices. Luckily it is more or less a circular walk. A Snow Goose walked slowly across my path as I watched a Great Blue Heron standing waiting for his lunch. 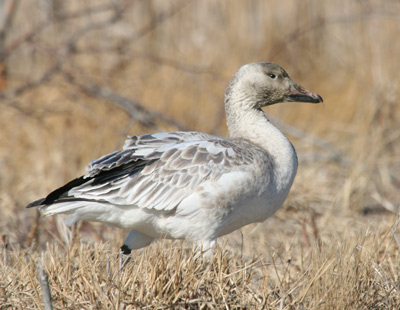 I finally caught up with Mark and Paul and told them about a Northern Harrier that I had just seen. Paul teased me about a fabricated Hawk Owl that he had enticed out of an owl box (dream on Paul!) Nearing the end of the track I admired another Northern Cardinal. I would love to have them visit my garden feeders on a cold winters day! Another Northern Mockingbird added to the delight as we watched a Yellow-rumped Warbler at a feeding station 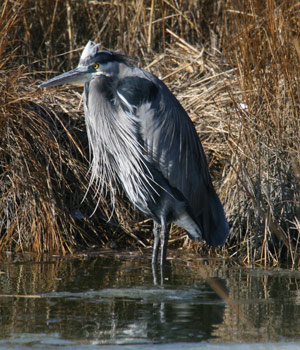 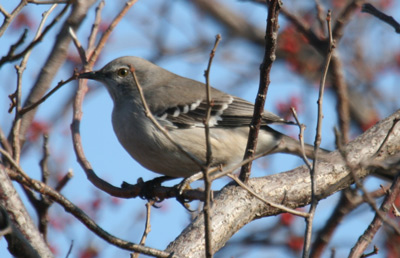 After some lunch Mark drove us to the beach where we were blown along in the wind. Hundreds of American Herring Gulls were running along the tide-line opening up shellfish along with Sanderlings. Further along the beach Purple Sandpipers were standing on the rocks as Double-crested Cormorants and Common Loons (Great Northern Divers) were fishing further out in the sea. Our day finished as we headed back to the pick-up flushing out a Pheasant as an American Kestrel sat on the wires above us.

No birding done at all today as we went up to the top of the in . We timed this so that we could watch the sun set and all the lights of come on. The view was spectacular! Future visitors need to be aware that queues can be several hours long. We managed to wait only about 20 minutes, but it was mid-winter!

We had an early morning flight back to the , where it was just as cold as we arrived late at night back at Heathrow.